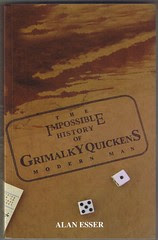 This is probably one of the oddest books I have read all year. Odd doesn't necessarily mean bad, but odd it definitely is. It's also weird. Eccentric. Quirky. Impossible, even.

Grimalky Quickens is a recent graduate, starting out on a new career working for Badgers Group in the city of Gloria. Gloria, both capital city and name of country, is an extraordinary place. Whilst never confirmed (the vague geographical placing of Gloria is indicative of the book as a whole - details don't seen to matter), Gloria seems to be an island, which, along with seven thousand other islands, makes up an archipelago. A rather nasty political character called Mubaba is trying to exert his power to take over all the islands within the archipelago and rule them under his own flag (see page 51). Gloria has somehow escaped Mubaba and is some sort of independent state, and now the other islands want to follow suit, and are fighting Mubaba for their own independence. I was somewhat intrigued by this Mubaba character, and these seemingly fictional islands. A little research shows that a General Mubaba is in fact a 'real life' character, featuring in...wait for it...a Nintendo Game Boy called Desert Strike. This might of course be coincidental, but sometimes, I like to think coincidences just don't exist. I might even write to Alan Esser to ask him whether this is all true. It's a too fantastic and rather original way, I think, to infiltrate modern culture into a work of fiction.

Anyway, I digress. Gloria is every city and no city at all that has ever existed, all at the same time. The city contains a Botanical Gardens, a Winter and a Summer palace, a Pantheon Square, a financial district (the Exchange), an Old Town, and a Downtown - it is every capital city in the world rolled into one. Its outlying towns are similarly strange. Grimalky's parents live in Bantam Town in Quickens Cottage which is surrounded by green space and trees and flowers and a white picket fence. Grimalky and his Dad drink in the Toad and Crow pub. Everything about Bantam Town is so British - Mr Quickens is even a master baker. Indeed, at the opening of the book, we meet Grim, and his friends Chip and Trawg, watching horse racing on a television, and drinking flat beer in a pub called the Deer's Head. Esser himself refers to them as 'pubs'. All throughout this book, Gloria seems to display, sometimes in small ways, and sometimes in big ways, the defining and stereotypical features of various nations - the US, Britain, South Africa, Hong Kong, Singapore etc. Esser presents little microcosms of ways of life, and presents them in this city called Gloria, which could be anywhere in the world, or somewhere very particular in the world, depending on which way you want to look at it.

Gloria is a moneyed city, whether because of or in spite of its independent state. Badgers Group is one of the financial pinnacles of the city. Everyone knows about Badgers Group, whether it be Giovanni Raffles, the marvellously camp hairdresser, or the waiters in Strumples restaurant. If you work for Badgers, you are someone to be both revered and feared in Gloria, that seems certain. Badgers Group, then, is the natural home for Grim Quickens. Grim is a boy with big ambitions. Grim wants to run before he can walk. Grim wants promotion before he has even started the job. So one Monday morning, he starts out as An Official Adjunct to the Assistant Underling in Charge of Administrative and Extraneous Affairs. We all see the ridiculousness of this job title, but sadly, Grim doesn't. Expecting a huge office with a big desk in a light filled room, Grim is horrified, to say the least, when his office turns out to be nothing more than the broom cupboard. Stuck working for the frightening Mrs Itchinson, Grim spends much of his time involved with menial tasks which take him to the old fashioned print room to make endless photocopies, or to the pay phone on the street outside his office, making work calls. He doesn't have a telephone in his office. He doesn't think to ask for one.

Grim is desperate to succeed, and in the end, it is this desperation which drives him and which ultimately forges his downfall. When it becomes clear that Grim is the only person who thinks he deserves more within Badgers Group, he begins to plot blackmail in order to get what he wants. He creates files for the major players in Badgers, and attempts to get ahead within the group that way. He eavesdrops at every occasion (in the toilet, in the restroom etc) in order to get any information which might prove beneficial to his climb up the corporate ladder, and infiltrates private and confidential information about those he wishes to 'expose'. The critical moment comes when he finds that Mr Dibbles, one of the major bigwigs in the company, has a foot fetish, and visits a prostitute often to satisfy this need. On a company outing to the beach, he tries to test out this fetish by 'attending' to his girlfriend Irene's feet in front of Dibbles and his wife. Grim's desperate need to succeed comes to a head at this juncture, and he snaps, right in front of all his colleagues and Irene, has a big shouting fit, and is subsequently sent to a mental institution for assessment (in order to keep his job within Badgers Group), having to stay overnight, and endure the company of his fellow sufferers.

Grim, at the beginning of this tale, is a fairly unremarkable chap. Yes, he wants to succeed in his job, but his ambition has a boyish charm about it. He plans and plots how he is going to do this with precision, but the reality of his job with the Badgers Group begins to show him the mundane nature of office life for a junior. Grim suffers because he lives his life through the reality in his head, not the reality of the actual situation he is in. He wants a life he doesn't have, but seems to pretend that he has it anyway. The three women in his life- Doris Tiffle, Penny Scroggins, and Irene Pettifer, eat up his time and non-existent money (he lives mostly on credit) and yet none of them seem to make him happy, and they seem to hamper his rise to corporate fame. I could have liked Grim, had he lived his life differently, but his ambition makes him almost like a raving lunatic, a man who is agitated, unsettled, clawing his way to where he wants to at any cost. Most of all, I dislike the sense of desperation that surrounds him. In the end, it makes me pity him. In fact, the ending of this novel shows the extent of Grim's desperation. Having had a rather confusing conversation with Dibbles, head honcho of Badgers Group, in which Dibbles seems to be aware of Grim having found out about his visits to prostitutes, Dibbles and Grim seem to reach some kind of agreement (it really isn't very clear) in which Grim is kept on in spite of his recent show of mental instability. Grim really believes that he has made it, will be Dibble's confidant and right hand man. His desperate struggle has borne fruits, he has succeeded. Clearly euphoric, he tries finally to conquer the heart of Emily, daughter of Dibbles. However, much like his desperation for a career landed him in a mental institution, so too does his desperation to win Emily's heart lead him to bad places - Emily declares rape at the end of the novel.

Esser has certainly concocted an interesting story - Gloria, the epitome of everything that is good and bad about the world today; Grim, who stands for everyman's experience within the corporate world - a life which is essentially mundane and plodding towards some unknown great and good, if that even exists, and at what price anyway. Esser's writing is neither very good nor very bad. He shows great humour in places, and an obvious astuteness for human nature, and what we will do to fulfil our desires, whatever they may be. I wanted to keep reading this novel, to find out what happens to Grim, despite the verboseness of Esser's writing, and the somewhat lack of plot, and anything very exciting really happening. There is perhaps, though, something of the morality tale in this novel - what does getting exactly what you want mean in reality? Can you ever have exactly what you want or will something always be sacrificed, or suffer as a result of one single ambition? The title of this book 'The Impossible History' gives us a sense that we shouldn't believe anything we are told in this book, and its idiosyncrasies support the idea of a fabricated life and a fabricated world. Perhaps Esser is trying to tell us that there is a crevice into which we can all fall, and it exists in the space between the reality of our actual life, and a life which exists only in our head. Grim keeps falling into this crevice, right from the start of the novel, right up until the end, and maybe he is a warning to us all.

I admire the quirkiness of this book, but am not surprised that it has been self-published. There is something of the raw and uncrafted about it, but I somehow like it for this. I feel fondly towards it because of this. It isn't always easy to read - Esser is a verbose writer and sometimes the lack of clarity with plot and character and sense of place and time can be frustrating. By self-publishing, Esser is telling us what he wants to tell us, exactly how he wants to tell it.

Self-publishing has been a way for him to share his writing, a writing which hasn't gone through the sieving process of agents, editors, and developmental work. Of course, it provokes all the usual questions and responses surrounding self-publishing versus big house publishing - what is worthy writing, who decides this, and does mass appeal always mean a novel is well crafted. For my part, I am glad I met Grim, and got a peek into his warped world. I learnt something from him, and for this reason alone, I am glad Esser has shared his work with a wider audience.