PUT UP OR SHUT UP: DAVID SEABROOK AT THE LAST CHANCE SALOON.

In Jack of Jumps David Seabrook attempts to identify Jack the Stripper, a serial killer who murdered at least six prostitutes in the mid-sixties and dumped their naked bodies across west London. What Seabrook does impressively is lay out in gruesome detail the police investigation into the murders. What he fails to do is finger the killer. When I was introduced to Seabrook at the launch party for Tom McCarthy’s novel Remainder at the end of last year, he told me the murderer was still alive and he was named in this book. I thought this unlikely then, and I remain just as sceptical after reading his text. The publishing industry has been running scared from the absurdly stringent UK libel laws for decades. Clearly, neither Seabrook’s publishers nor the libel lawyers they consult would allow him to name the man he insinuates is the killer; nonetheless it took me just a few minutes at the British Library to identify this individual as former Metropolitan Police Detective Andrew John Cushway. I must stress here that there is no smoking gun. Detective Superintendent William Baldock who investigated Cushway, and whose theory is disinterred by Seabrook, ‘in the end failed to build a case against the suspect’ (page 362). Short of a fit up, there was and there remains no evidence which might have led to Cushway being charged, let alone convicted, for the nude murders. Indeed, according to Seabrook even Baldock believed that if Cushway was the killer, he would strike again after the murder of Bridie O’Hara, but the killings stopped. Seabrook’s response to this is qualified (presumably at the insistence of his publishers and their lawyers) but ultimately unambiguous, the relevant passage runs in part "If – and it’s a big if – this man were the murderer and revenge his motive, then he would have good reason to stop when he did... Well bad things, like good things, must come to an end. That’s life I suppose, and it doesn’t mean you have to kill yourself. So let’s just say: The suspect did not kill himself. He is not dead." (page 363)

The police files on Jack the Stripper remain closed to the public, and yet Seabrook was granted access to them; which naturally raises the question as to why he was allowed to review this material. Among other things, it seems likely that the old bill did not like the ongoing speculation about the identity of Jack the Stripper, which for the past thirty-five years has tended to implicate serving or retired Met officers. Indeed, among the more recent theories to do the rounds was one to be found in Jimmy Evans and Martin Short’s book The Survivor (Mainstream, Edinburgh 2001), which named deceased top cop Detective Chief Superintendent Tommy Butler as the nude murderer. While Seabrook spills much ink dismissing the ‘Big John’ and Freddie Mills theories about the identity of Jack the Stripper, and gleefully character assassinates Brian McConnell (recently deceased author of Found Naked And Dead, a 1974 book on the nude murders published by New English Library), he doesn’t even mention Tommy Butler as a possible fit for the fiend. While I don’t think Evans and Short prove that Butler was Jack the Stripper, I find their solution to his identity more satisfying than Seabrook’s use of Cushway. That said, I would assume members of the Metropolitan Police force much prefer having a low ranking officer who was dismissed from the service in 1962 identified as the killer, to a top cop like Butler; which might explain why Seabrook was granted access to the closed police files.

But let’s return to Cushway and address why he is so easy to identify from the information Seabrook provides. Jack of Jumps tells us the dates on which Cushway committed various petty crimes, the places these took place, and names a witness. Now, a serving police officer convicted of committing burglaries and jailed as a result was likely to be enough of a news story to make the national press in 1962. Since there are precise dates for the crimes, coverage of a conviction might be found easily enough simply by raking through old newspapers. That said, these days many research libraries have digital editions of newspapers; but the only readily available electronic version of a newspaper covering the sixties is The Times. But this one digitised newspaper was all I (or anyone else) needed to identify Cushway very quickly. I entered search terms provided by Seabrook; the name of a witness to one of Cushway’s petty crimes, viz Arthur Cox, and one of the business premises broken into (I choose Permutit); and then it was simply a matter of selecting search dates (I used 13 September 1962 to 31 December 1963). My first attempt at identifying Cushway worked, since the story ‘Prison For Black Sheep Detective’ (30 November 1962) came up on the screen in front of me a few seconds later. Given that it is much quicker to do a digital search than a manual one, this is the route to the information the overwhelming majority of researchers are likely to utilise, which means that like me they would be led directly and very quickly to The Times report on Cushway’s 1962 court appearance, rather than that of some other newspaper. Seabrook, who projects a self-image as an indefatigable researcher, presumably knows this, and as a consequence ought to have concluded that some of those reading and reviewing his book would do just that. So having conjured up this Times news report on my first stab at finding it, I was surprised to experience a sense of deja vu as I read it.

I have no problem with plagiarism, since if something has been written well enough by another author, my inclination is to reuse it rather than rewrite it. Indeed, there are extended passages of other writer’s out-of-copyright material in a number of my novels; and two of my books consist chiefly of reworked citations from pre-twentieth-century authors. I find the ongoing press scandals about authors who plagiarise ridiculous, but I am nonetheless careful about what material I recycle in those of my books I sell to commercial publishers. This is a matter of pragmatism, I don’t want my books removed from circulation and therefore I prefer to avoid blatant breaches of copyright. Thus I find it surprising that much of The Times story about Cushway is reproduced not only without attribution, but virtually word for word, sentence for sentence, paragraph for paragraph, on pages 356 and 357 of Seabrook’s book, with only slight changes such the disgraced detective’s name being replaced with phrases such as ‘the man’. This is a high risk strategy on Seabrook’s part since the very structure of his book (with the lacuna of the unnamed man at its centre), is going to lead any clued-up reader to this anonymous but copyrighted piece from The Times. Seabrook thus appears to be actively willing that the censure of the literary establishment be heaped upon him. Or perhaps he thinks liberals are too thick to spot exactly how he’s taunting them. Judging by the review his book received from David Jays in The Observer of 14 May 2006, he may be right. Jays writes that Seabrook: ‘focuses his outsider identification on the killer: both of them watching, waiting and contemptuous...’ but makes no mention of Seabrook’s audacious plagiarism; and so we can deduce from this that he probably hasn’t done the few minutes research that led me, and would lead any other competent reviewer, to The Times article about Cushway. It seems Seabrook’s ‘real crimes against the bourgeoisie’ (crimes against the ‘rights’ of property are what capitalists most fear) are safe from exposure where literary ‘talent’ of the ‘calibre’ of Robert McCrum (books editor at The Observer) reigns supreme. Seabrook taunts the literati with his obnoxious opinions about working girls, while perhaps believing they’ll never catch him out at his real tricks.

While I have absolutely no problems with the use to which Seabrook puts the Times article on Cushway, it is simultaneously symptomatic of what I suspect is wrong with his book taken en bloc. Since I don’t have access to the original Jack the Stripper police files, I can’t prove that Seabrook has used them as literally as he has The Times piece, but I suspect this to be the case. In Jack of Jumps, Seabrook sees everything from the point of view of a cop, which is why he often misses the broader picture. Like a cop he wants to finger somebody as the murderer, and it’s Andrew John Cushway who is in the frame, but there is no evidence to sustain Seabrook’s insinuations. The case against Cushway consists simply of the fact that in 1962 he broke into various premises in an attempt to make cop colleagues who he felt had ostracised him look stupid; so Seabrook’s theory (borrowed from Baldock) is merely the following: might he not perhaps have also murdered between six and eight women to wind up the Mets? The leap from minor break-ins to serial killing is too great to be credible without additional evidence, and there isn’t any. And again, if Cushway was caught doing petty break-ins simply because he was careless enough to travel all the way to them on his own moped and its licence number gave him away, then it seems unlikely he was competent enough as a criminal to carry out a series of murders undetected. Seabrook doesn’t show Cushway to be connected to these macabre killings in any way whatsoever. He ought to be ashamed of himself for making it so easy to identify this apparently still living seventy year old as the individual he suspects of being the killer, and he should issue an immediate and full public apology to Cushway. Forget the libel laws, individuals like Seabrook ought to put up or shut up. He should have written his book on Jack the Stripper without fingering Cushway, since he simply hasn’t got the evidence to back up his insinuations. 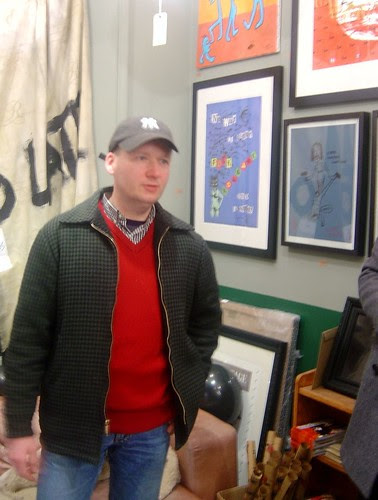 Stewart Home, 43, is the enfant terrible of the UK post-punk avant-garde art movement and cult writing circuit. He is the authorof over 20 books including Down and Out in Shoreditch and Hoxton, 69 Things to Do with a Dead Princess and his most recent, highly acclaimed, novel Tainted Love. Famous for his elaborate hoaxes and agit-prop art events, and feted by the likes of Kathy Acker, Iain Sinclair and the NME, he is often referred to as the English successor to William Burroughs. For more information please see: www.stewarthomesociety.org